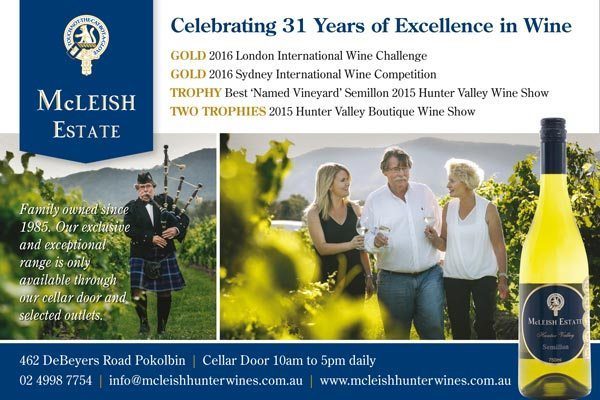 This year celebrates the 31st vintage for McLeish Estate Wines, with owners Robert & Maryanne McLeish overseeing all aspects of the family business. The wines are produced using hand harvested fruit from Australia’s most historic wine producing region of Pokolbin.

Owner Robert McLeish on the unparalleled success of the Cellar Reserve Semillon 2007 says “The 2007 Semillon exhibits vibrant aromas of lemongrass, lime and honeydew with aged complexity of honey silkiness and classic citrus flavours delivering wonderful length and delicacy that Hunter Valley Semillon is so renowned for. The most recent international success sets the McLeish Estate Semillon at a record 21 Trophies and 28 Gold Awards to date- a true champion of the world.”

The trophy results for the London International Wine Challenge will be announced on the 16th of May 2016 in London.

The Estate produces six varietals- Semillon, Chardonnay, Verdelho, Merlot, Cabernet Sauvignon and Shiraz. The McLeish Estate wines are produced in small quantities and are only available at the cellar door, selected well-known restaurants and through the McLeish Estate website.